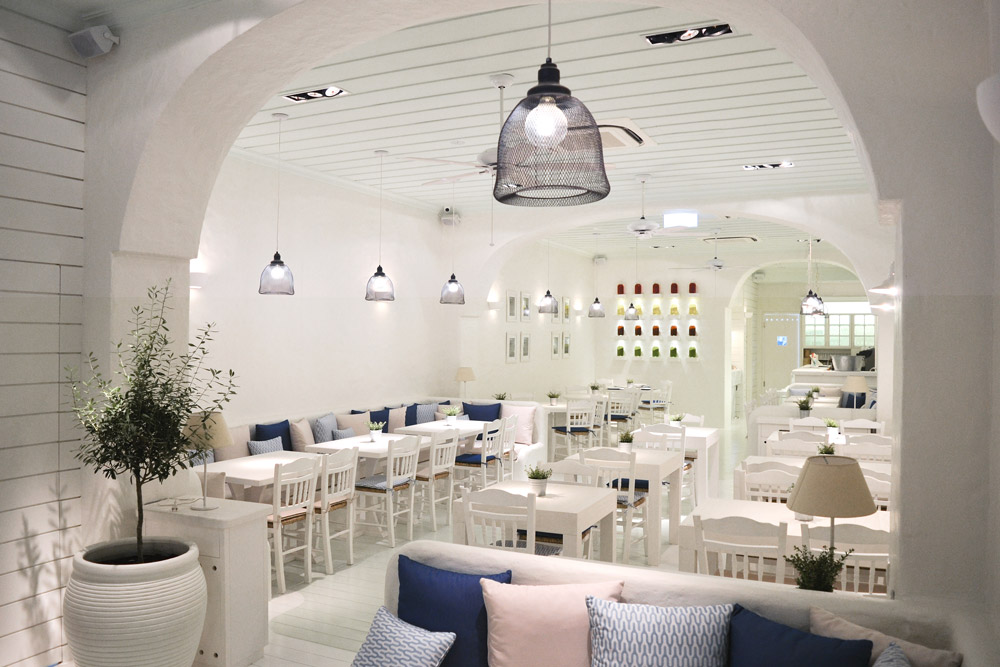 Alati is greek word that means “Salt” and is the most important material for every food and every kitchen. Located in the center of the city Singapore in Asia, Alati –Greek Divine Cuisine- is Greek restaurant.
The project was about to create an scenographic atmosphere of a chic traditional Greek island Restaurant based on the cycladitic design. Cyclades are a group of Island located in the center of Aegean sea in Greece (such as Mykonos and Santorini) with an ancient civilization know as “Cycladic civilization”.
The houses of the cycladitic style are small size houses , made of stone painted with many layers with plastic white paint. Actually the style if Cyclades is minimal and very stylish ,like the statues of their civilization.
Because of the strong winds that are blowing in the in the Islands of Cyclades, known as “meltemia” during almost all the year, usually all the furniture in these islands are constructed from stable and heavy materials, so the tables and the sofas are mostly builded from bricks and cement and then they are covered with white paint.
Based on these guide lines the design of the restaurant is trying to bring this Cycladic atmosphere in the city of Singapore, with builded sofas, white covered stone surfaces on the walls and traditional handmade wooden tables and chairs. The ceiling and the floor are painted in smooth color of green and original greek olive trees are placed inside of the restaurant. Because of the small width of the store some big mirror have been placed on the walls.
The entrance has been moved 2 meters inside of the store, so there could be a pre-entering zone witch is very common in Greece, to be protected from the sun and the wind. In this restaurant this pre-entrance zone is made for being used as a smoking area, because in the city of Singapore smoking is forbidden in all the restaurants.
Some arches have been designed in the restaurant to improve the Greek house atmosphere. 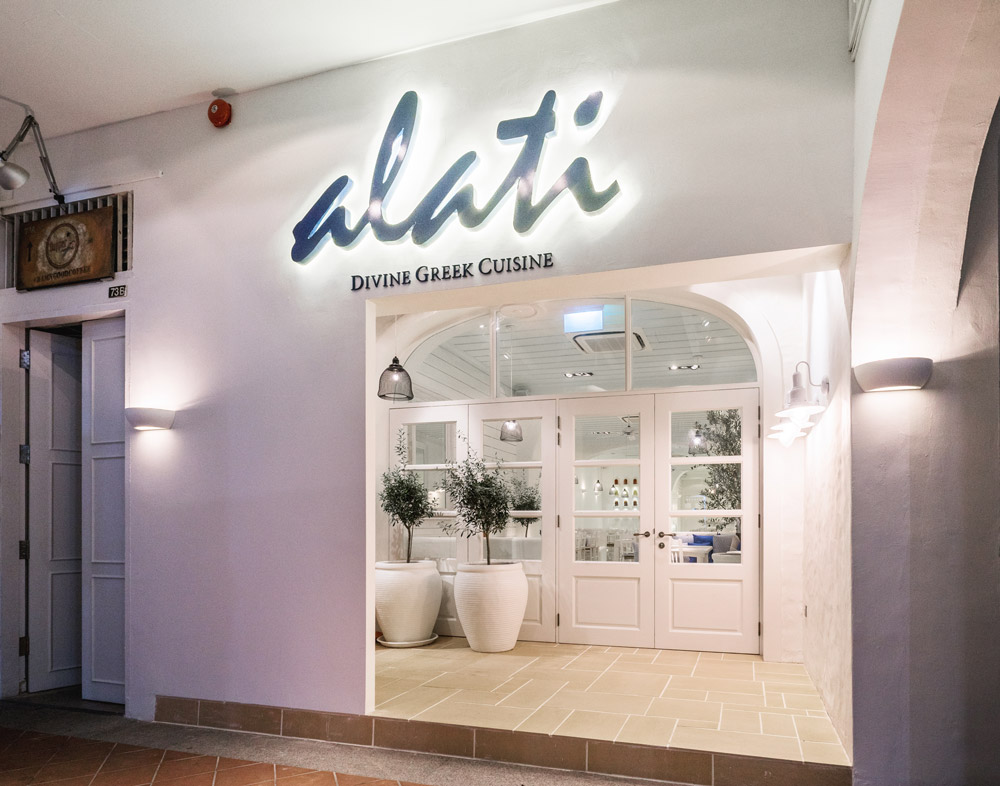 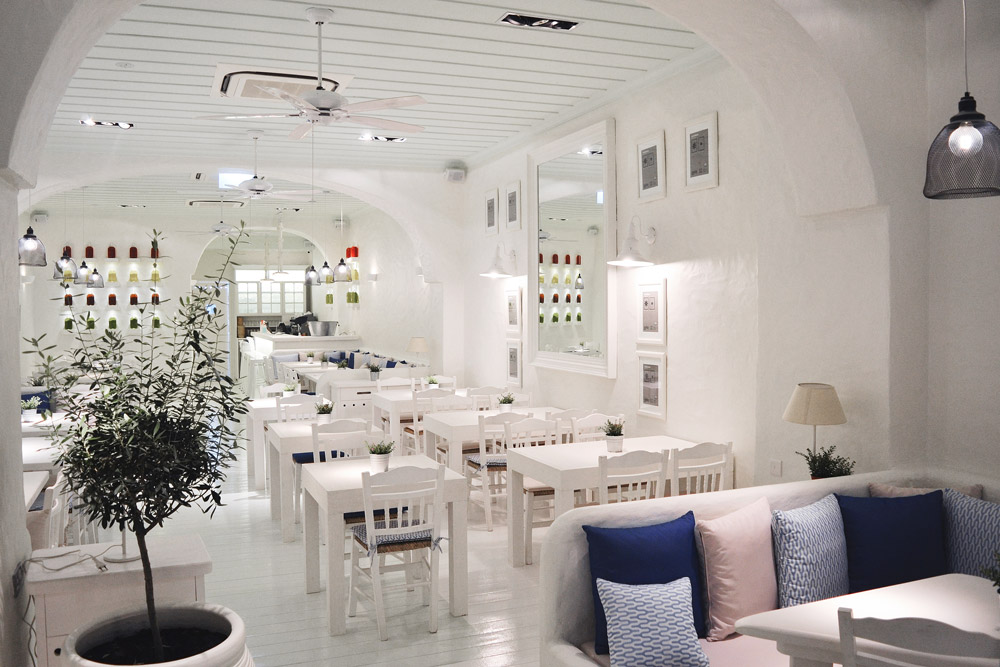 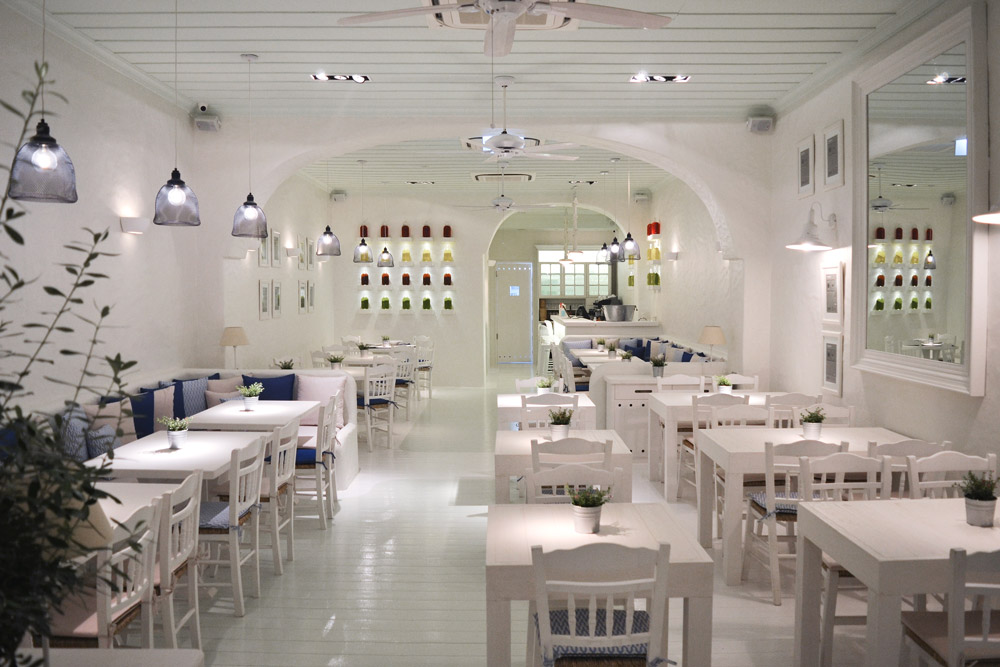 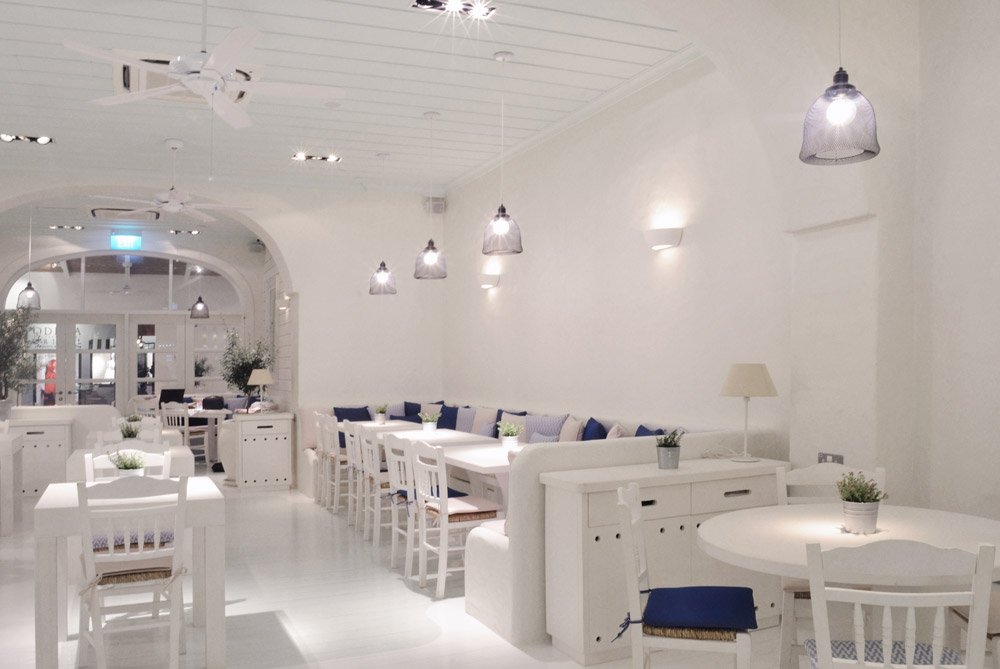 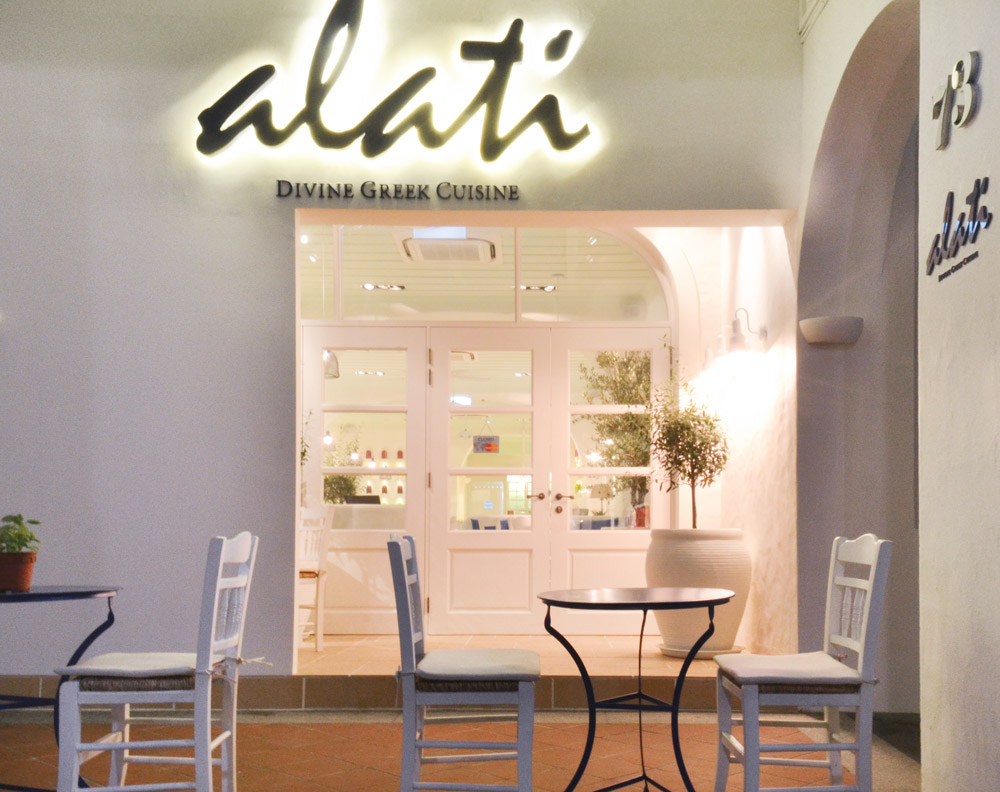 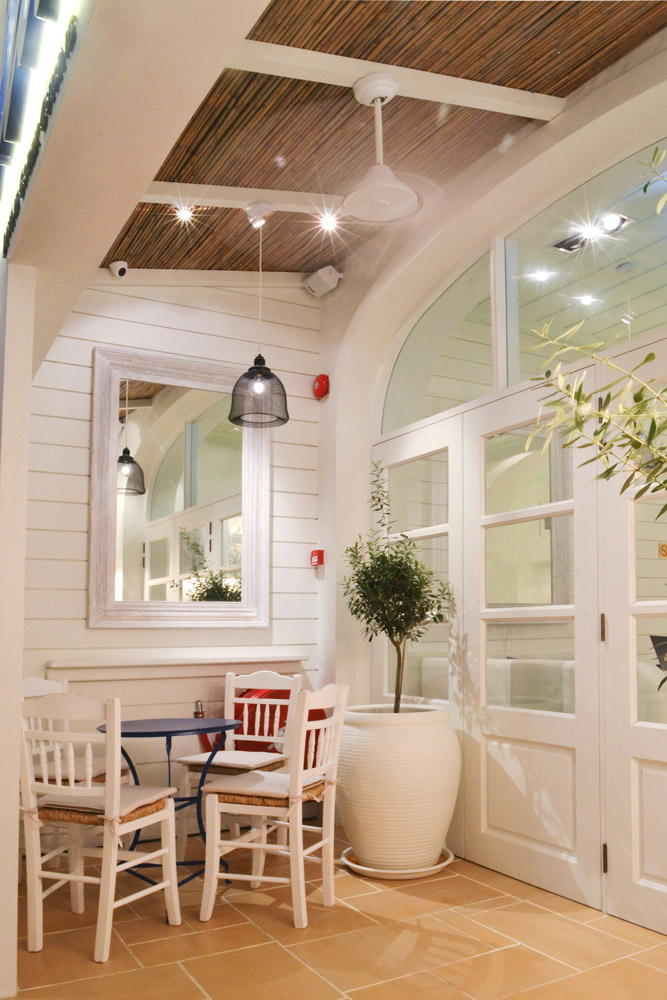 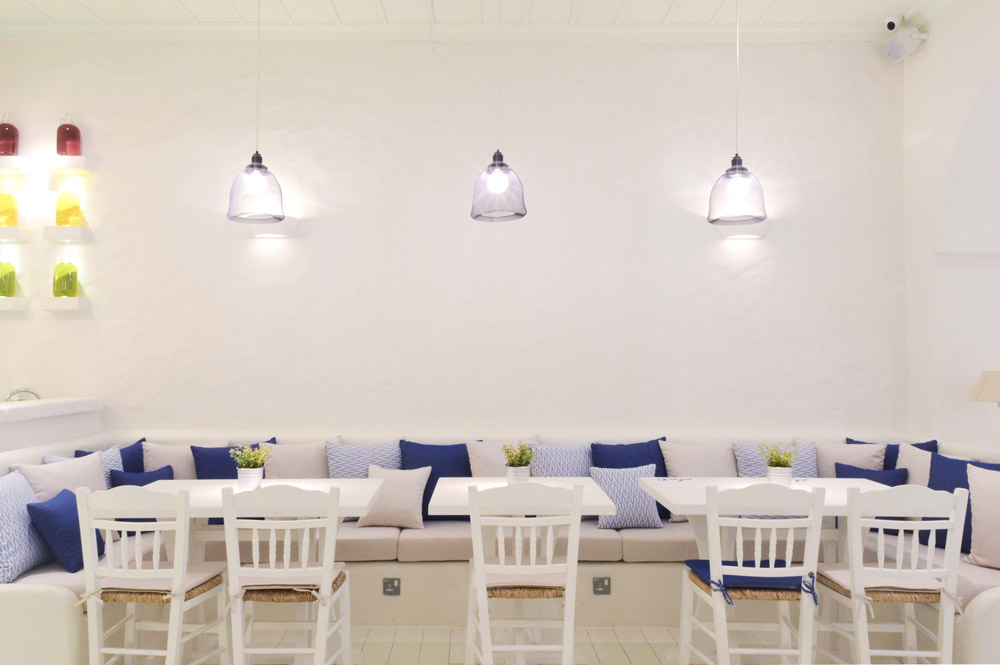 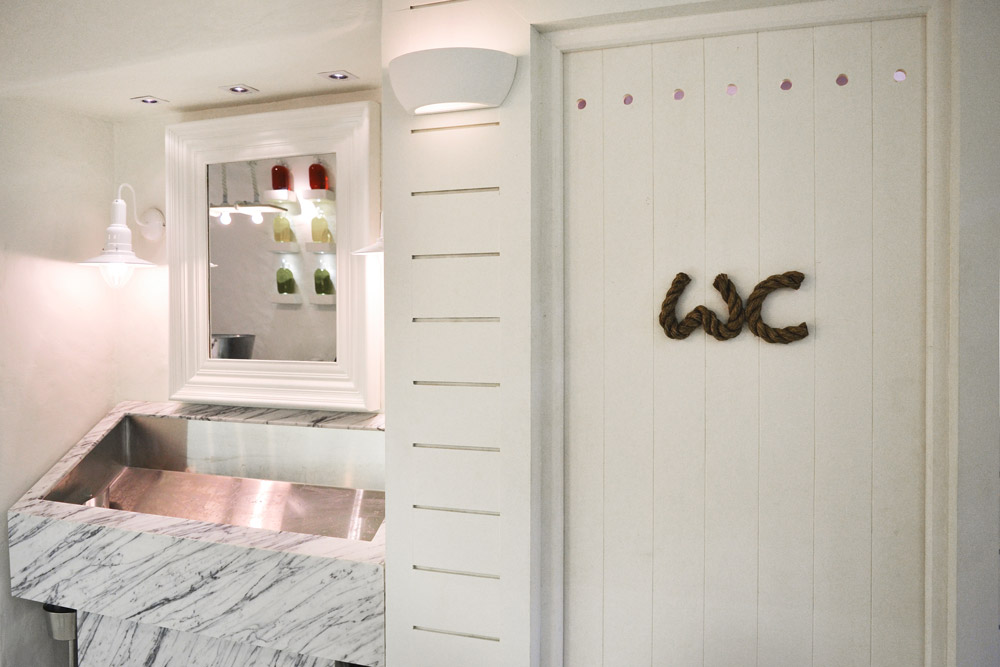 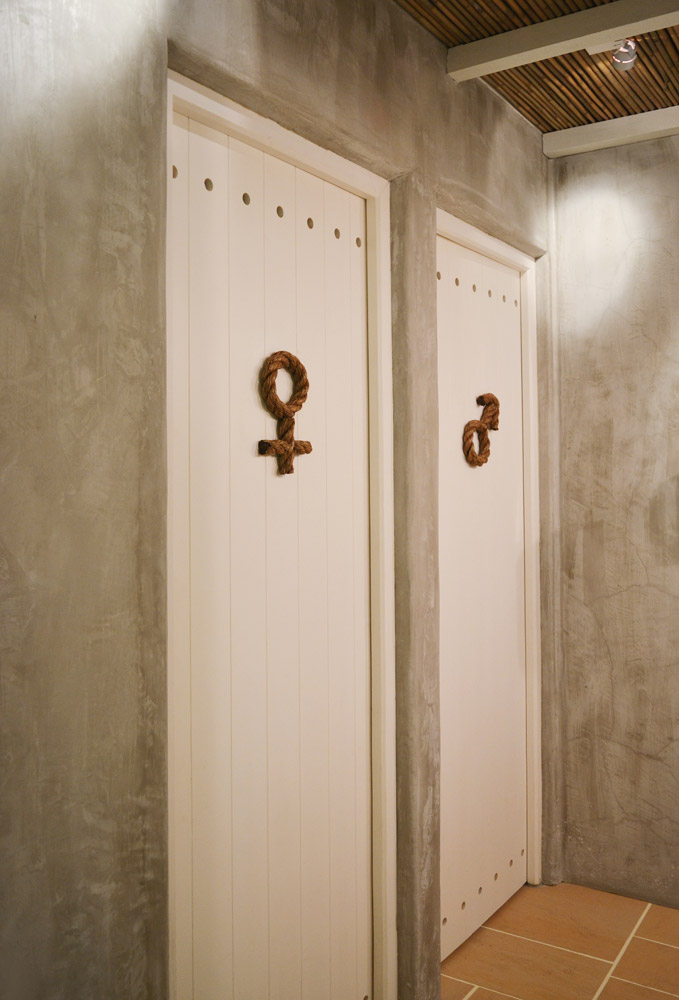 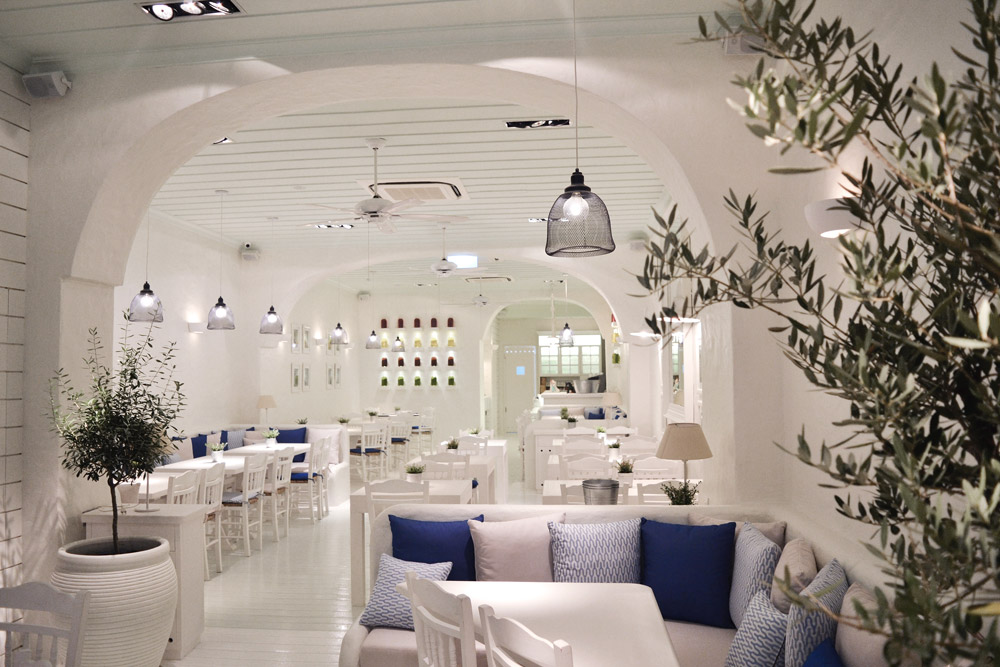 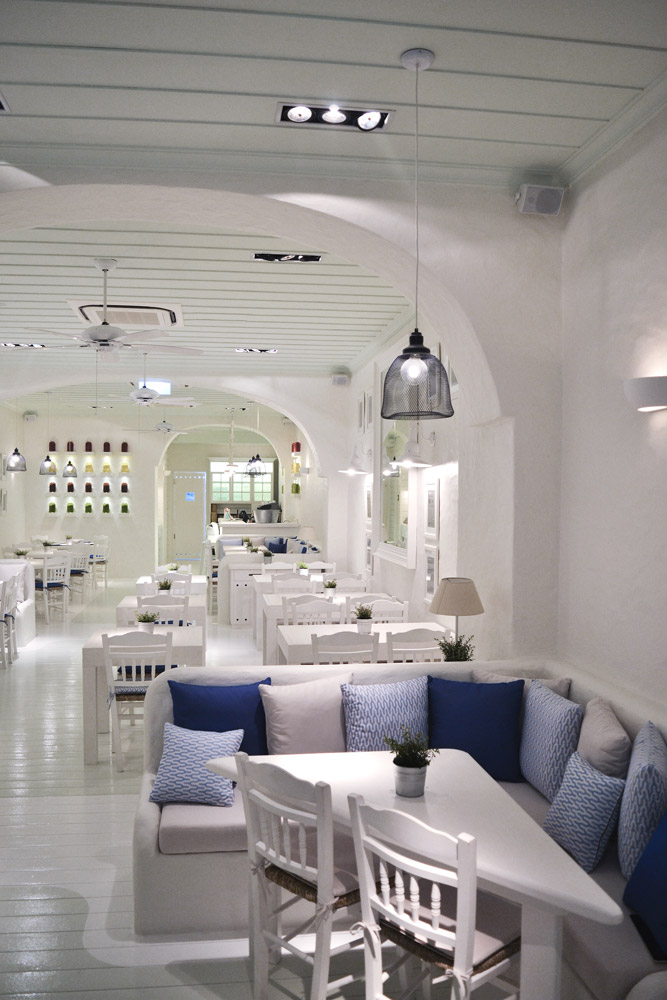 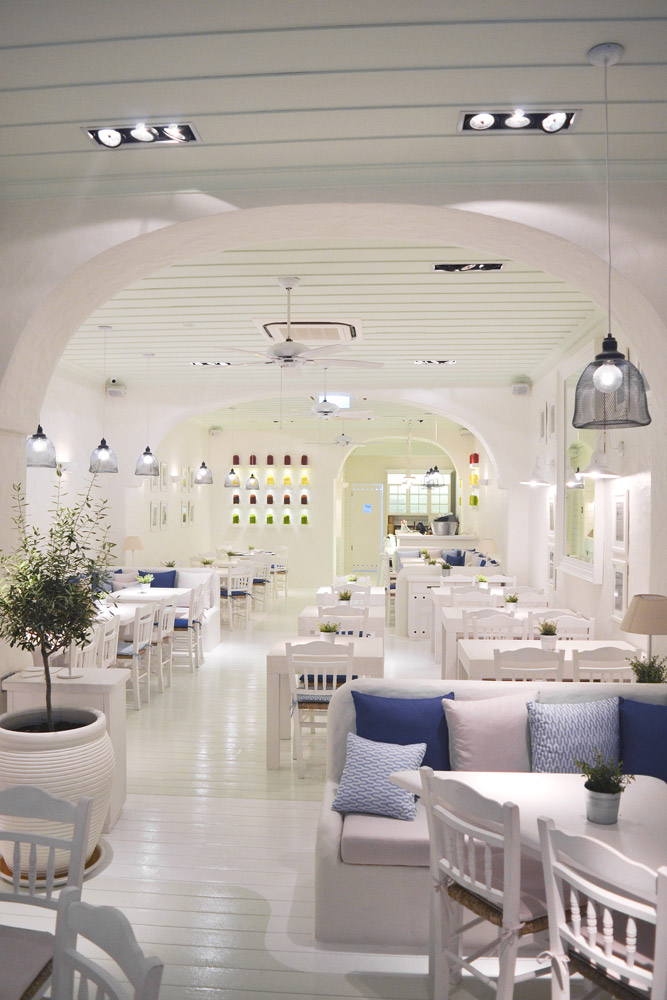 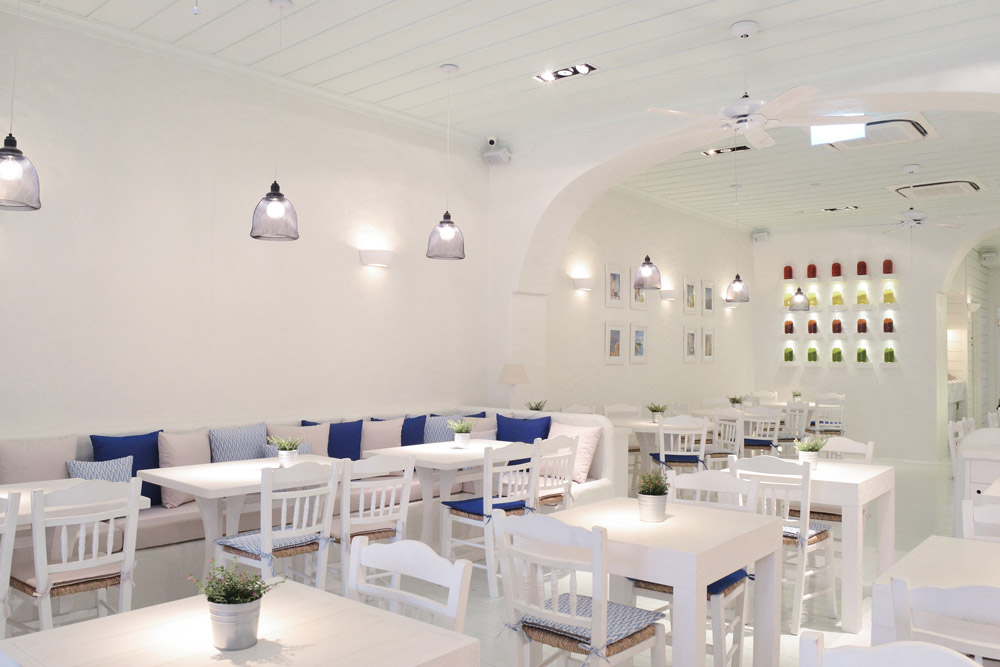 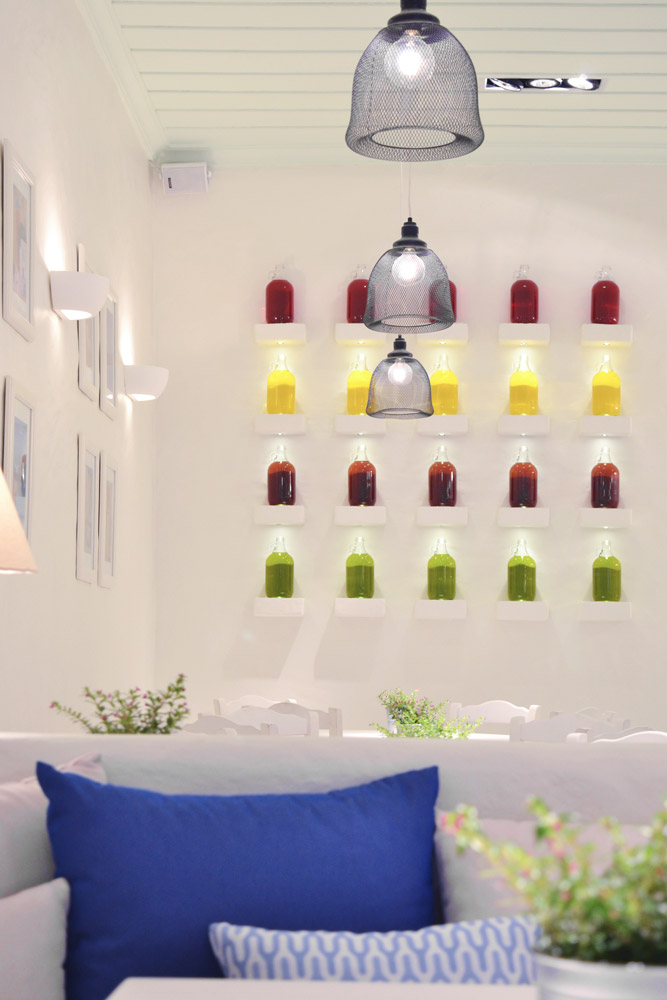 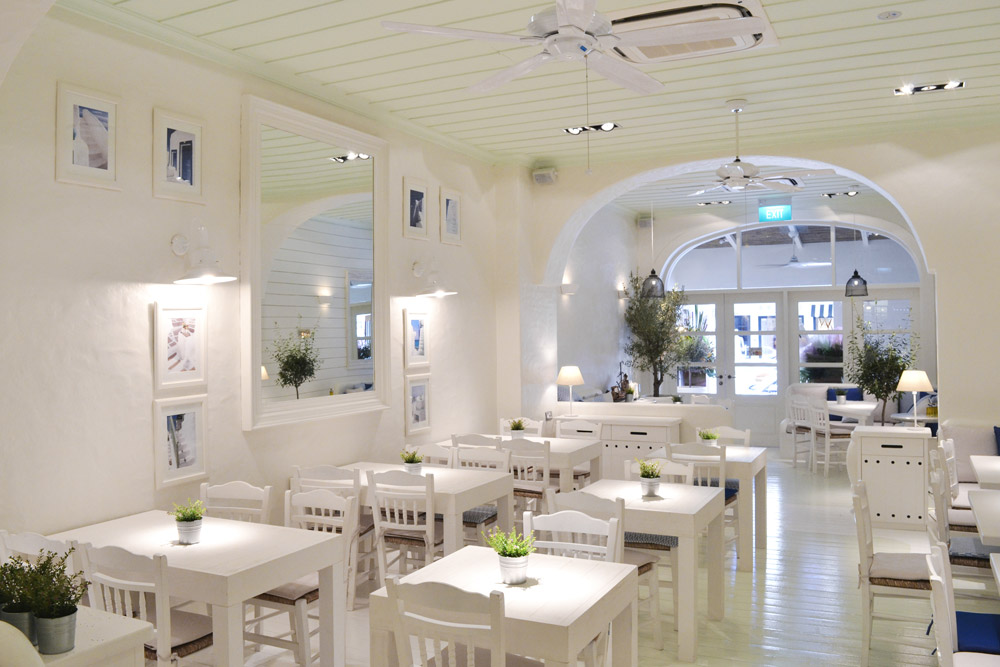 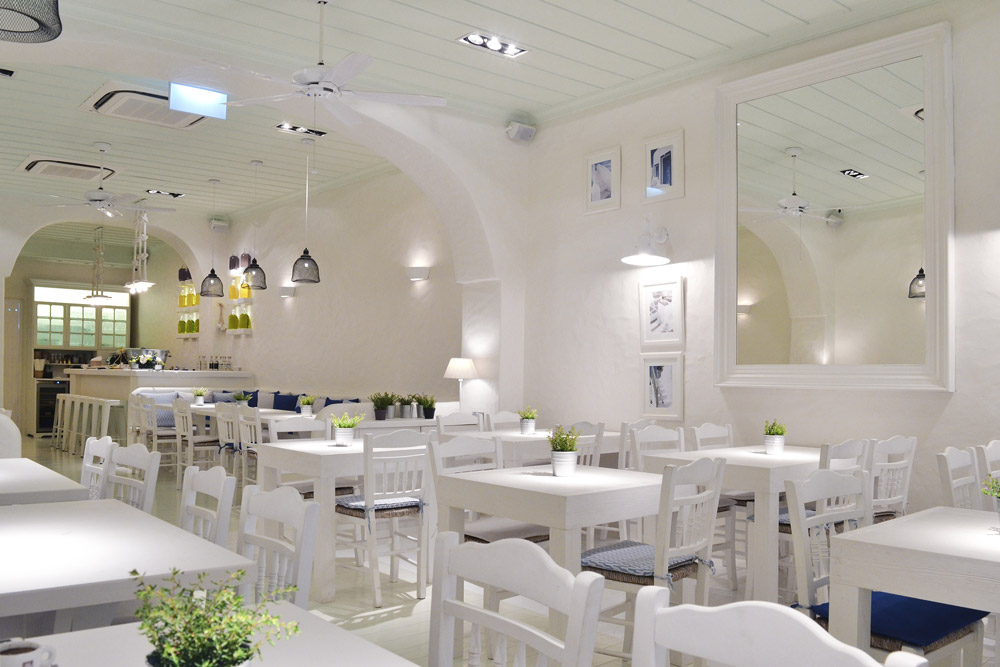 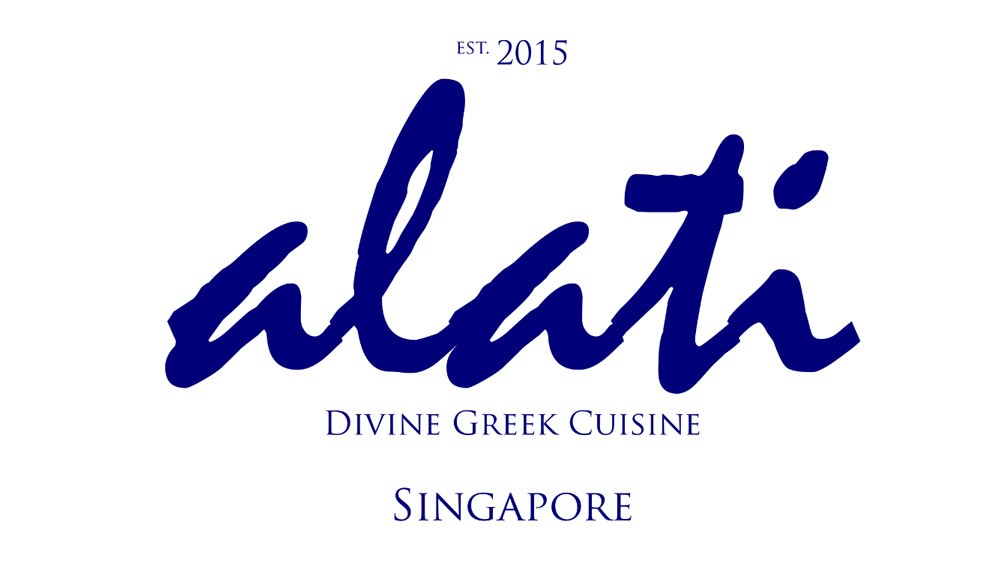